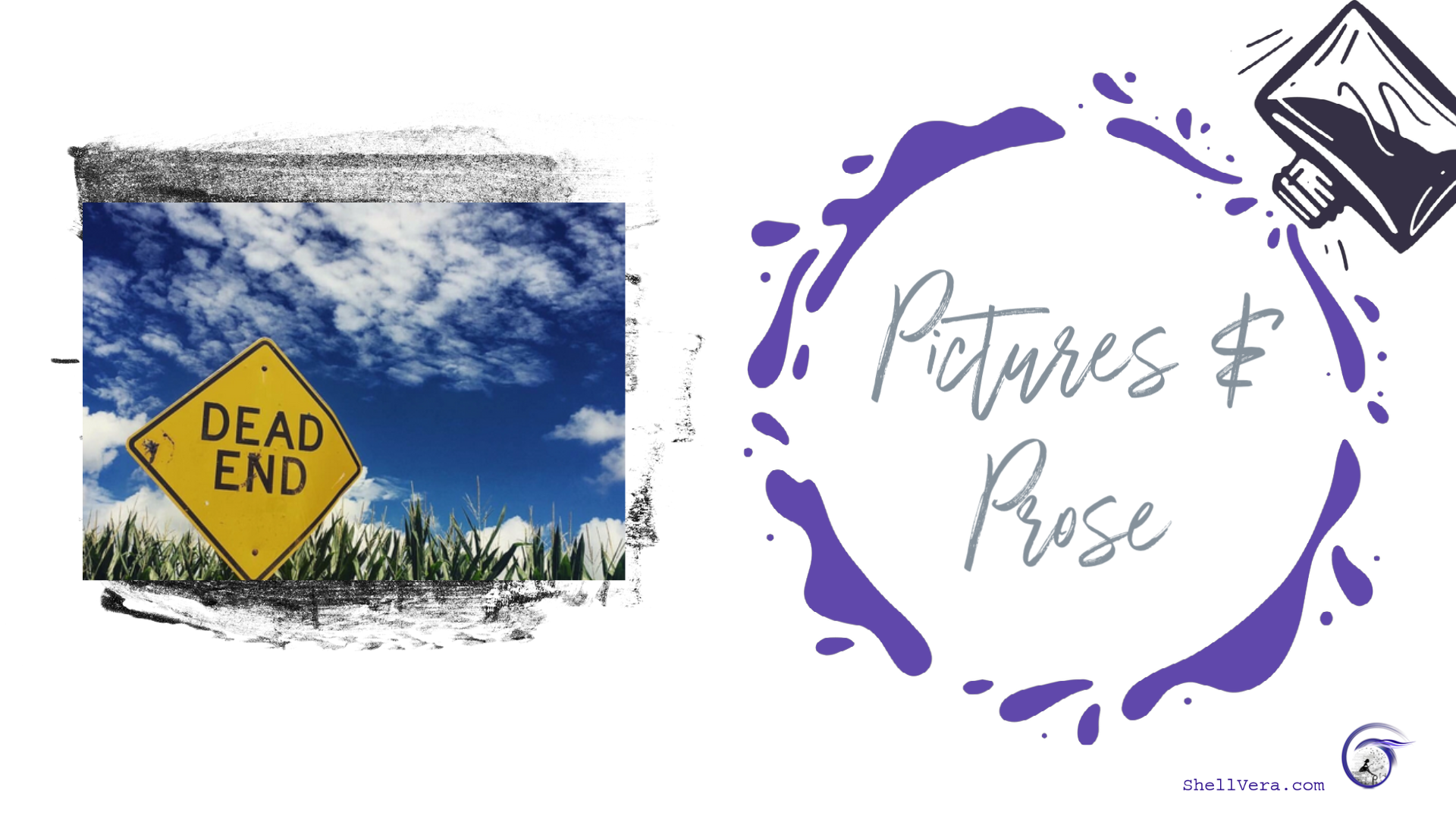 Sometimes I like to look a picture and then let my fingers run all over the keyboard. No edits – just free writing for 15 to 30 minutes without really thinking so much as letting my Spirit take charge and do its thing. Today was one of those days but I used two photos… one had to begin the story and one had to end it without losing flow. ~Shell

I’d driven down this road before, knowing it led nowhere, yet I kept coming back to it. The sign staring me down each time I approached. “DEAD END” it shouted at me, challenging me like a “Wet Paint” sign not to let my curiosity win and instead just turn my truck around and go another way. I stopped momentarily, as I did each time I came upon the sign, and contemplated turning around but something always pulled me further down the path. It could be the wanderer in me who loved exploring the land and enjoyed the beautiful scenery that would sprawl in front of me for the next twenty minutes. It could just be that I never have been one to avoid a challenge and this sign always seemed to be a challenge versus a note. Something in me needed to see if today may be the day that instead of ending up on private property I may find that a new road  that I can pass through. One that hasn’t been well traveled yet.

I pushed my foot back down on the gas pedal and continued to drive, slowly as I did each time I drove down this road. As I drove, I wondered if anyone ever came down this road besides me. It was a breathtaking canvas nature painted that should be enjoyed by many, but perhaps the sign had deterred the masses from seeing. Were people that easily rerouted? Were people no longer curious what lay beyond the obvious?

As usual, I went over some bumps and hit a few ditches that made me thankful I maintained my truck properly so the suspension could handle the unkempt land. This road looked as though someone started to pave it and then decided they didn’t want visitors so they stopped. I’ve always been a little slow to pick up on cues so this never stopped me from continuing. I wondered if there had been a family who lived here at one time or if it had vacant for years and perhaps the town maintained it. Whoever was keeping up with it had a lot of work on their hands, but never seemed to come out to enjoy it.

As I drove further and enjoyed the view, I thought about how I am like this in life as well. I always want to travel down the paths where I know I am going to have to turn around when I reach the end. You know these paths… making friends with people you know will hurt you, having crushes you know won’t like you back, getting involved in sports you know you can’t play – okay that last one really has nothing to do with a dead end but it feels better to think that’s why I keep signing up for things I know I will have to back out of because I am not good at them or because I am not qualified or because … just because. I turned the radio up and laughed at the timing of the song playing on the local country station.

Have you done that before? Started something you knew that you wouldn’t finish? Or got involved in something you knew you weren’t going to be kept around for just because you knew it would feel good and provide a nice false security along the way? We do this often. I think it’s human to believe we can change and to think, “This time it will be different.” I laughed… even if I get to the end and have to turn around, I am still going to drive down the road, just like Cole was singing about.

Being that I had 20 minutes to drive, my mind started to wander to all the times I’d traveled dead ends in my life. Would I change any of them? There was always a lesson and something beautiful that came, even if it was just pain. One dead end I traveled taught me that I hadn’t lost all feeling in my life after some really horrific events. Another dead end taught that me seasons in life are okay – we can’t expect people to be around forever. And yet another dead end taught me that I hadn’t given up all hope on the future when I thought I was pretty much just existing day to day. These are all great lessons to learned. As I looked out the window and took in the crisp, country air, I noticed new flowers I hadn’t seem blooming last time I took this road. I turned the radio off and enjoyed the rest of the ride in silence.

The air blew through the car and I smiled a stupidly big smile as I took in the view. The sun was about to set, the dusk sky was beginning to fill the air, and the crisp air was soon going to become rigid as night fell. The crickets began chirping and my ears were filled with a melody of nature sounds that you couldn’t hear the same way through an iPhone or sleep machine. This was heaven on earth. This dead end country road was a slice of unchartered land that most would never experience – perhaps because they obeyed the signs and perhaps because they were afraid to find out what lie at the end of the road.

As the end of the road came into view I realized that once again, I was going to be rewarded with a beautiful sunset but no new path for me to travel. I wasn’t sure whether to praise the sunset or curse the end of the road, so I turned around, put my truck in park, grabbed a blanket, and hopped into the bed of the truck to watch the rest of the breathtaking show before heading back home.

This post was originally published on a site I don’t use any longer. shellverapoetry.wordpress.com.

Read Other Posts from this Series

← Rachel Hollis’ #Last90Days Challenge & “Girl, Wash Your Face” Book – Join Me!
7 Essential Oils to Get Through “Those” Days →

This site uses Akismet to reduce spam. Learn how your comment data is processed.

Search for a specific word or phrase.